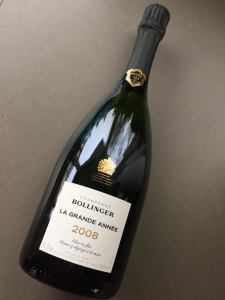 Champagne Bollinger launched the Grande Année 2008 at the end of March, 11 years after bottling. An event!

2008 is long expected for every enthusiast, because the year can be counted among the really big champagne years.

Mainly thanks to the last weeks just before the harvest, because the months before were extremely erratic.

The dégorgement of this 2008 was in July 2018. Only 8 months later did it reach the market – everyone should do that.

Small detail: the first Grande Année on the bottle previously developed by Bollinger: wider from below, longer and strikingly thin neck, so that air contact remains minimal during the dégorgement.