Bollinger owns 178 hectares with vineyards – only in grands and premiers crus – of which 104 hectares are planted with pinot noir.

The Vieilles Vignes Françaises is (of course) produced in a very small release only (6 barrels were harvested in 2019), which makes it extremely exclusive and therefore also expensive.

And so in 2015 the idea arose to produce another blanc de noirs, more precisely a Blanc de Pinot Noir, which, considering the price, should come between the Special Cuvée and La Grande Année. 2015 also offered all kinds of opportunities.

The four winemakers at Bollinger, including Gilles Descôtes, chef de caves, and Dennis Bunner, assistant chef de caves, each blended their own cuvée and the winner in 2015 turned out to be the PNVZ15 (see photo on the right).

2015 was a warm year, and Verzenay, on the north side of the Montagne de Reims, is relatively cool (harvest is always 1 to 2 weeks later than in Aÿ).

The Special Cuvée always contains around 50 percent vins de réserve, and because additional vins de réserve are now also required for the new PNVZ15 champagne, the number of magnums with reserve wines has increased to 800,000, so it is not a true vintage, nor is it pure Verzenay – there are also grapes from 3 other crus, Bouzy, Aÿ and Tauxières, in the blend. 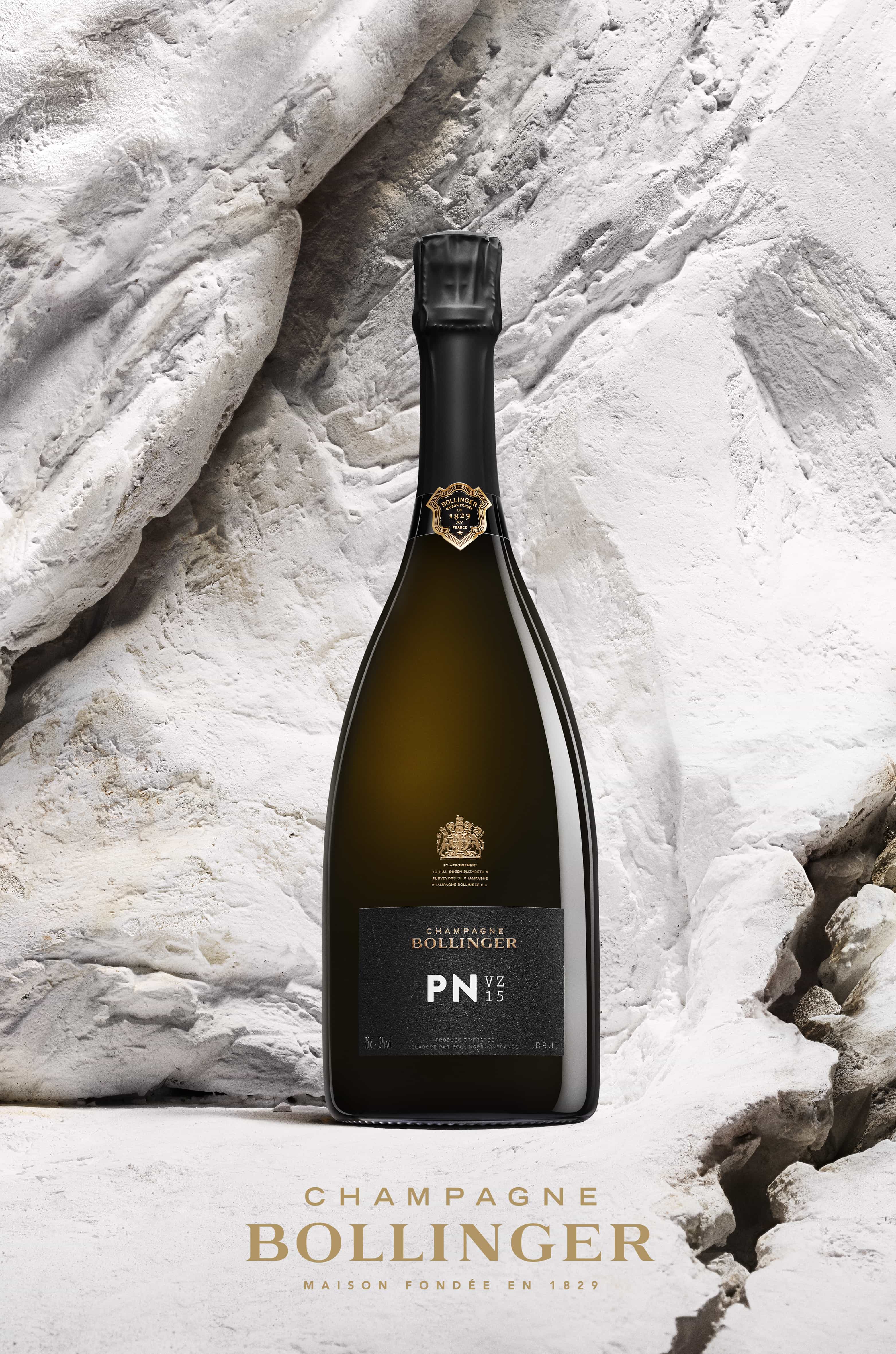 Unlike the Special Cuvée, of which 15 percent fermented in oak barrels and unlike La Grande Année, which fermented for 100 percent in oak barrels (a signature of Bollinger), 50 percent of the wines for this PNVZ15 spent more than half a year on oak.

For this reason, the number of barrels at Bollinger has recently been expanded from 3000 to 4000. These barrels come from Chanson in Beaune – part of the Bollinger Group. In the near future, however, Bollinger will also be making oak barrels (of 205 and 410 liters) from their own forest near Cuis!

The PNVZ15 was bottled in May 2016, has subsequently been sur lattes for 3.5 years and has been disgorged in November 2019. The dosage is 7 grams/litre. I recently got to taste this ultra-new champagne, while there was an online connection with the people in Aÿ and with many colleagues worldwide. We tasted four different wines with each of us at our own residence (see first photo). The first two from Verzenay – from two different lieux-dits and in addition, the first had been on stainless steel before bottling, while the second had spent that period on oak. The third bottle was the 2009 reserve wine, used in the final blend. The last bottle four was the PNVZ15.

The result is really Verzenay in character and really Bollinger in quality. It is a beautifully complex champagne with spiciness, red and black fruit, stone fruit, apricot confit and nutty.

The mouthfeel is creamy, powerful, intense and tight at the same time. In the extremely long finish you taste grapefruit, a certain saltiness and wet chalk, so it is very mineral. It is a stunner.

I am already curious about the 2016 version. Whether it will be based on either Aÿ, Bouzy, Tauxières or Verzenay again, is still an open book for us. It could just be the rather unknown TX, because Bollinger owns 19 hectares there – Tauxières, premier cru with 99%, is the third cru by Bollinger after surface area Aÿ and Verzenay.

This champagne bottled in a black bottle will hit the market in September 2020. The price is not known as yet. Dutch importer is Verbunt-Verlinden in Tilburg.